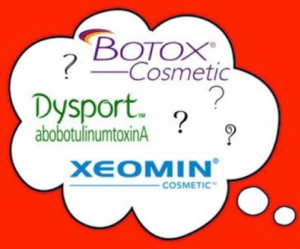 Botox, Dysport, and Xeomin are cosmetic treatments that yield similar results. How do you choose what’s best for you?

First, let’s understand what they have in common. They are all neuromodulators that block nerve impulses in muscles. The muscle activity that causes the lines in your skin is reduced, creating a smoother look.  All three do this.  And boy, are we glad they do!  Who doesn’t want to look 5-10 years younger?

Now let’s talk about what they don’t have in common.

Botox is the oldest of the neuromodulators and is very popular with injectors and patients alike. It’s made by Allergan and is marketed to “temporarily improve both moderate to severe crows feet and frown lines.” Results take 3-10 days and last up to 5 months. Off-label, it can do a host of things like:

Dysport, by Galderma, is officially marketed as “temporary improvement in the look of moderate to severe frown lines between the eyebrows of adults less than 65 years of age.”  Results take 3-7 days and last up to 4 months.  It is less expensive per unit than Botox but you need 2 ½ to 3 units for every 1 unit of Botox.  Dysport is purified differently making it easier to spread over large areas giving a more natural look. Galderma’s mantra is “fight the over done look.”  One of the better perks of Dysport is less injection sites, which translate to less needle pricks for you.  If you’re scared of needles you should consider Dysport.

Xeomin, by Merz, is officially approved to “temporarily improve the appearance of moderate to severe frown lines between the brows and crows feet.”  Results take 3-7 days and last up to 4 months.  It’s less expensive than Botox and 1 unit of Xeomin is equal to 1 unit of Botox.  Yay!  It’s cheaper!  There are no additives in Xeomin, which is great for people susceptible to allergic reactions.

Xeomin is the purest form of Botulin Toxin A, making it potent and effective.  Xeomin is stored at room temperature, which makes it less likely for you to get a weak dose. Comparatively, Botox and Dysport must be refrigerated and have a shelf life.

Enjoying this blog? You may also enjoy:

All three products are very effective in reducing facial lines between the eyes, forehead and crows feet.  It’s only a matter of which one works best for you. Choosing the right neuromodulator for you depends on your unique physical makeup and personal preferences.

Some people get better results with Botox while others with Xeomin or Dysport.  If you’re looking for a more natural look, then maybe Dysport is right for you.  If you have a real stubborn line, Botox might be your go-to.  If you are interested in saving a few dollars and tend to have allergic reactions, maybe you should give Xeomin a shot. Or, you could try them all over time and settle on what works best for you.

Have more questions? We’d love to help. You can contact us or come in for a free skin consultation to learn what’s right for you.

Want to join the discussion?
Feel free to contribute!